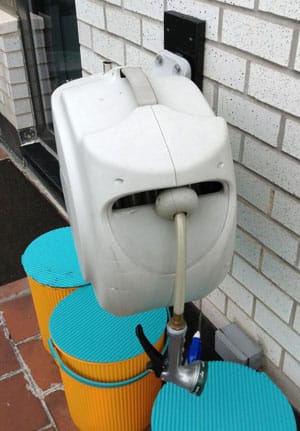 The Frontgate hose retracts easily and neatly into the hose reel with just a gentle tug.

This retractable hose reel is a product for anyone who does not like the mess of a hose coiled or laying in the back yard or on their terrace, deck, or patio.  It is an attractive dispenser that seems to be extremely durable, and works just as promised.

I live in a New York City penthouse with a very large wrap around terrace.  We have plants at both ends of our terrace, a distance of about 160 feet away from each other.   Until I discovered the Frontgate retractable garden hose, the task of watering our plants was unpleasant.   I purchased a regular garden hose, but it was always laying around the terrace or poorly wrapped around an outside hose attachment, neither of which added to the beauty of our magnificent terrace.

The Frontgate retractable hose reel can be easily installed on a mounting post (sold separately) or attached directly to a wall or fence using just four lag screws. The mounting hardware is included.

The hose reel swivels 180 degrees so no matter which direction you pull from, the hose will easily pull out and retract. I installed it in the middle of the terrace so that I can reach both ends of my terrace.

The assembly comes with a 6-foot hose to attach the hose reel to a spigot, but you can use a longer hose if you need to install it further away. At 100 feet in length, the Frontgate hose covers a large area.

The hose is made of 2-ply PVC, reinforced with nylon braiding. In terms of durability, that usually means that the hose will be less long-lasting and more kink-prone than a rubber or rubber-composite hose (although I haven’t had any problems with it). If you will be using the hose in a high-traffic area or pulling it around corners, it may not stand up as long as a thicker or more solidly-constructed hose. On the positive side though, it’s lightweight and easy to handle.

It’s worth noting that the hose is only ½” in diameter, rather than the 5/8” typically found in garden hoses. Because of this, it’s best used on decks, patios, balconies, or other smaller areas. The smaller diameter makes it difficult to get enough water through the hose for running sprinklers, washing cars, or other jobs that need significant water flow, but it’s perfect for watering plants or containers. And, at 100 feet in length, it gets to the farthest parts of my terrace.

Near the end of the hose that’s attached to the hose reel, you’ll find a yellow line that marks the point at which to stop pulling on the hose. If you pull it past this point the hose may not retract, so keep an eye on it as you pull out the hose.

This is a good product, which I have now been using for two seasons without any problems.

The Frontgate retractable hose reel can be purchased directly through Frontgate, as well as on Amazon. (affiliate link)

Editor’s Note: Tom purchased the Frontgate retractable hose reel directly from the company and received no compensation for writing this review. We would note that some reviewers have had issues with the retracting mechanism ceasing to function after only one or two seasons of use.

What’s your experience with retractable hoses? Do they work? Any you recommend or would like us to review? Let us know below.