Effective protection for young trees although not everyone will like the look.

So what, exactly, are TreePans?

Invented by a Des Moines, Iowa family, the idea for TreePans was born when, after working in a local apple orchard, two brothers realized the need for a product that would help fruit trees survive harsh conditions, such as those that occurred during Iowa’s summer drought of 2012.

TreePans are large (33” wide) lightweight, plastic, adjustable disks that offer an alternative to edging and mulching. They eliminate weed and grass competition around a newly planted tree and protect the bark from being damaged by mowers and other equipment, or by animals and active people.

TreePans are built to nurture young trees for up to three years after planting (that’s the length of time during which young trees typically need additional support and care). The center opening can be adjusted with the sliding doors from 1” up to 12” in diameter.

Also, by capturing and funneling water directly to the tree, they reduce runoff and preserve soil moisture in the planting area.

It’s important to note that TreePans are NOT water reservoirs. You can’t fill it with water and have it slowly seep into the ground around the tree. However, the company has developed an optional 5-gallon reservoir that can be used with TreePans if desired. With only 8 pieces to assemble, there was no mistaking what was what so it was clear what had to go where. The assembly instructions were easy enough to follow but the assembly of the donut-shaped TreePan was not as easy as the description led me to believe. To clip quarter panels together, slip the tabs (left) into the slots (right), beginning at the smaller end and working toward the larger beveled edge. Locking the clip (shown on left) into place requires some maneuvering.

As I attempted to join two of the quarter panels per the instructions, I struggled to lock the clips in place. The plastic pieces are malleable enough that I was able to force the clips to lock, although I did worry about breaking them. Experience pays off: the second joining was easier.

Taking the TreePan apart was simply a matter of releasing the clips. They can be easily stored and reused. Clips hold the quarter panels together and are easily un-clipped

The next step: take the two half-moons (or half-donut) pieces outdoors and clip them into a ring around the tree.

Finally, the sliding doors are put into place and adjusted. Though the website pictures show the sliders nearly touching the tree trunk, I thought it wise to allow more space between the TreePan and the trunk so that the trunk does not stay overly moist. I also worried about bark-gnawing critters taking refuge under the TreePan.

[Editor’s Note: The manufacturer suggests putting the sliding doors directly against the tree to prevent critters from getting under the TreePan.] Appearance in the Landscape

TreePans are available in four colors: brown, terracotta, charcoal, and green. None of the colors fade into the landscape. Rather, they stand out and invite curious questions.

By design, the edges rise a couple inches above the grass in order to funnel water toward the tree, making it stand out even more.

Personally, I didn’t like the look of the TreePan and think that the look of this product is not right for the typical home landscape (it elicited many comments and puzzled looks). However, there are situations for which it would be much better suited, for example:

I placed a TreePan around a Cornelian Cherry Dogwood (Cornus mas) in fall. It didn’t need to be staked in place or otherwise secured; I just put it on the ground around the tree.

The tree was very small when I planted it, and had been struggling for two years. It looked a bit out of place in the home landscape, but the TreePan protected the young plant from mower damage, and, quite possibly, from winter damage from animals. TreePans have a positive effect on plant growth but are not attractive in the landscape.

My Cornelian Cherry Dogwood is thriving and has nearly doubled in size during the eight months it has been protected by the TreePan. It is so vigorous that I’ve decided to leave the TreePan in place for another year despite its appearance. Deer did not trample the little shrub, the mower did not damage it, and bark-gnawing animals did not winter under the TreePan’s protective covering as I feared they would.

Overall, the TreePan worked as promised. It takes a little practice to put it together but once it’s in place it doesn’t require any work. It protected the tree I placed it around and the tree is now thriving. TreePans are made in the USA from recycled plastic that stands up well to the elements and requires no maintenance. Plus they’re reusable. However, some home gardeners may find that the appearance of the TreePan doesn’t fit in well with their aesthetic. 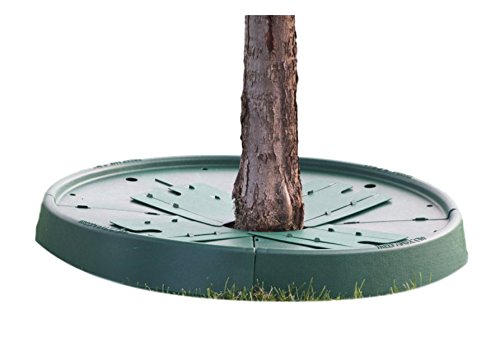 TreePans are available at treepans.com. The cost is $39.95 each, plus shipping. You can also find them on Amazon.

Now over to you – would the appearance keep you from purchasing or using TreePans? Let us know in the comments below!

Disclaimer – GPReview would like to thank the TreePans for giving us a free sample to review. There was no expectation that it would be a positive review and we received no compensation for writing it. All opinions expressed here are those of the author based on personal experience using the product.

Pamela is a horticulturist and garden writer living in Emmaus, PA. Formerly the test garden manager for Organic Gardening magazine, she tends vegetables and ornamentals for public and private gardens. Learn more about her here.