How to Sharpen a Spade

Although many of us don’t do this, sharpening a spade can make a huge difference in the ease with which it cuts through soil, sod, and roots. Once you’ve used a sharp spade, you’ll wonder how you managed to work with a dull one!

Shovel vs. Spade: What’s the Difference?

Tools For The Job

Sharpening a spade is simple. All it takes is a few inexpensive tools and a bit of practice. There are many styles of clamps to choose from. Just pick one that holds your spade firmly in place.

Before you start, fasten the spade securely in a vice or using clamps (attaching it to a table or workbench is best). Position the spade horizontally with the front of the blade facing up.

You don’t want the spade to move around as you sharpen the blade; movement makes it difficult to keep the correct angle as you file and can lead to injuries. So if you don’t have clamps or something to fasten the spade to, enlist a helper to hold it firmly in place as you work.

Next, make sure that the spade is rust-free. Why? Because filing a rusty surface will dull the file. 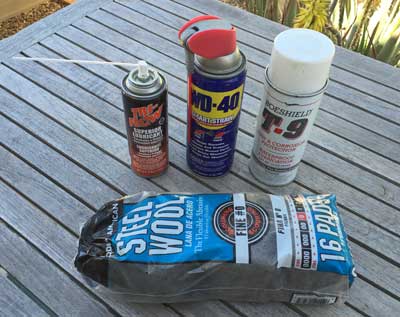 Pretty much any type of oil or lubricant will do but these are the ones I use. My favorite is Boeshield T-9.

If the spade is rusted, remove the rust first by scraping, then follow up with steel wool. For a heavily rusted blade, try using a wire brush attached to a drill bit– it’ll make quick work of removing rust from a large area. Always be sure to wear safety glasses as bits of wire will often fly off the brush!

When you’ve removed as much rust as possible, apply a light layer of oil or synthetic lubricant like WD40, Tri-Flow or Boeshield T-9. This will help prevent or slow down further rusting. Clamp the spade firmly in place before you start working on it. The edge here is a little dinged up but it’s not too bad – no grinder required.

Now take a look at the business edge of the spade. Is it almost completely flat? Badly dinged up? Beveled on both sides? If so, the best option is to use a grinder to quickly whip it into shape. If you don’t have a grinder you can still sharpen the spade using a file – it’ll just take a bit more elbow grease.

Using a Grinder to Sharpen a Spade – You have a couple of options here: a bench grinder (a larger grinder that’s securely attached to a work bench) or a hand-held grinder (try this 4-inch angle grinder). Either will work well when used with a medium-grit aluminum oxide wheel.

Always wear hearing protection and goggles or other eye protection when using a grinder. Make sure that the sparks coming off the grinder fly toward the shovel, not toward you!

A grinder will leave a rough edge on the spade that should be touched up with a mill file as described below.

Using a File to Sharpen a Spade

A mill file is the most common file shape. It’s a rectangular file that tapers slightly in both width and thickness from the tang (the end where the handle is) to the end.

The cut of a file refers to how fine its teeth are. In order from roughest to smoothest, the cuts are: rough, middle, bastard, second cut, smooth, and dead smooth.

A single-cut file has one set of parallel teeth while a cross-cut or double-cut file has a second set of cuts that crisscross the first, forming diamond teeth.

Type of File to Use These are the mill bastard files I use. I prefer the 8-inch length as it removes more metal with each pass.

You’ll need a 10 to 12-inch bastard mill file (see sidebar for a description of what this means). The key here is that it has a wide, flat edge with a relatively rough, single-cut pattern of teeth. This allows you to remove enough material with each pass but without overdoing it.

There are many brands to choose from but the one I use most often is the 8-inch mill bastard file (with separate handle) from Corona. Always put the handle on before using the file!

Which Side of the Spade to File

A spade should have a bevel on only one side of the blade – the top side (the side that holds the soil when you lift it up).

How to Use the File

Files have teeth that face forward and work by removing a layer of material as they are pushed forward over the surface to be filed. Never pull the file toward you; this bends the teeth and permanently damages the file.

Push down as you move the file forward, using the whole length of the file. Use very light/no pressure on the backstroke. Use straight, even strokes and work your way from one side of the spade to the other, rather than going over the same spot multiple times.

It’s easiest if you hold the file slightly skewed so that you move it almost sideways as you push it forward.

File at the Proper Angle File the spade edge at about a 45 degree angle for best results. Notice the small pieces sticking out along the edge. If these aren’t filed off they can easily cut you.

A steep angle is less sharp but gives a more durable edge than a low angle. As a general rule of thumb, try to have ¼” of new metal showing when you’ve finished sharpening the spade. Or, if you can see the original bevel, try to keep the same angle as you file.

Keep filing until the edge is sharp and even across the entire blade of the spade.

If you run your finger across the edge (carefully!!), you’ll feel a burr all along the underside. Flip the spade over and remove the burr with file held flush against the back of the blade. Be careful not to round over the edge that you’ve just finished filing; removing the burr usually takes only a few strokes. 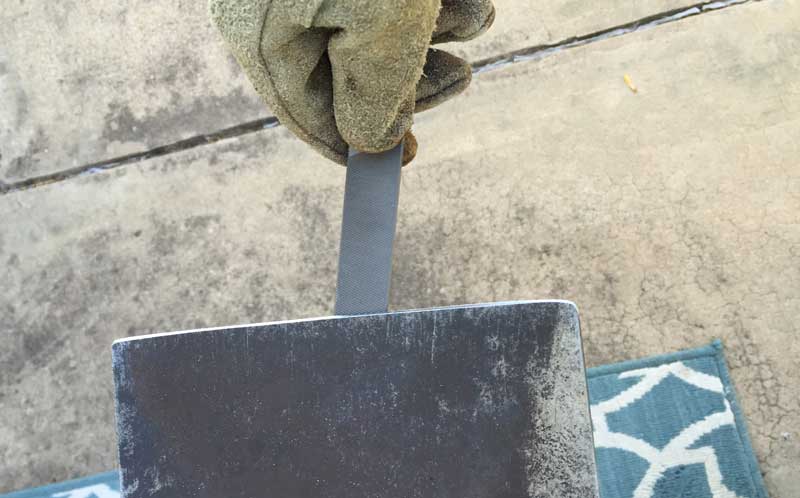 To remove the burr along the spade edge, simply place the file flat along the back side of the spade and draw it gently toward you.

If you have a lot of material to remove to get a good edge on the spade, you’ll likely notice that the file seems to get less effective after a while. Metal filings from the spade build up between the file’s teeth so that it cannot cut properly. You can remove those filings by dipping the file in water (which doesn’t always work well) or using a file card (a brush with metal bristles that’s used to clean files). Don’t knock the file against a hard surface to try to dislodge the filings; this usually just ends up damaging the file.

And that’s all there is to it!

Now over to you – Have you tried sharpening a spade? How did it work out? Let us know in the comments below!

Disclaimer – GPReview would like to thank Corona for giving us a free set of files to use in this article. There was no expectation that we would write a positive review and we received no compensation for writing this article. All opinions expressed here are those of the author based on personal experience using the product.

5 Comments on How to Sharpen a Spade